I will start the first of the Game Changer series with a story appropriate for the current holiday season. The event it depicts is both one of the happiest and saddest in my life. As I spoke about in one of my recent blogs, I learned many lessons on leadership and life from my dad -Big D. This story is the last one that I learned from Big D and one that I will never, ever forget. It is about the power of being thankful – the ultimate game changer. So without further to-do here is the story of the Thanksgiving Calves.

Big D and my mom moved out to “The Land” in the late 90’s when my Dad retired from Turbocare in Houston. The Land was a 30 to 50 acres of land (depended on how pumped up Dad was feeling that day) in a little town called Slocom in East Texas (population 250). On The Land there was a lake (built by my Dad and mom), trees (sycamore, sweet gum), acres of Coastal Grass, and 10 extremely overweight cows.

The cows were overweight because my Dad treated them like pets and allowed his grandchildren to feed them early and often. Each cow had a name – Rosie, Susie, Big Bertha, etc. – and each one was given to a grandchild for a portion of their inheritance. Dad use to point to a cow and say something like this:

Big D – You see Rosie over there.

Kerri – Yes, that’s my cow! She likes to eat this feed.

In the summer of 2002, each of those cows was ready to make the first deposit on the grandchildren’s inheritance. Each was pregnant and set to deliver sometime in November. Unfortunately, Big D was not to see it from here on earth. On November 5, 2002, Big D passed away from a heart attack out near the fence where we would feed the cows. This is the sad part of the story. 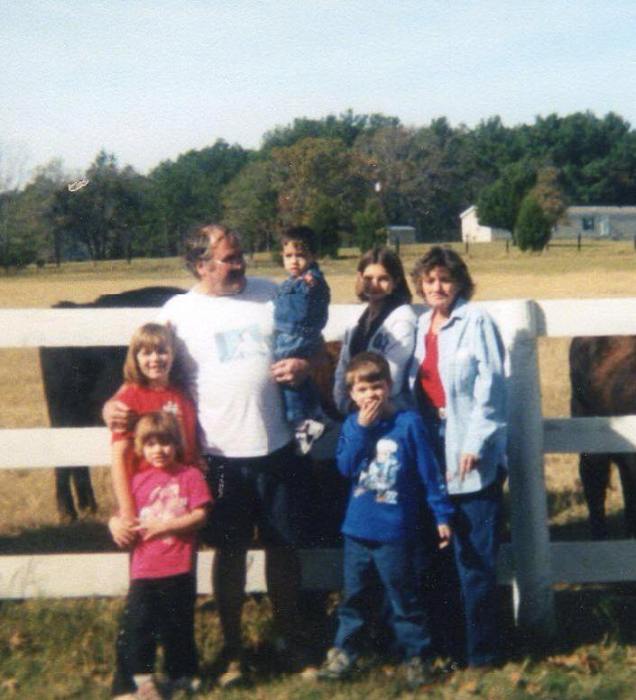 Now let’s turn to the happy part and the moral of the story. I and my entire family went out to The Land for one last Thanksgiving to be with Mom. As we arrived, some light snow had fallen. As we rounded the bend to The Land, we saw two calves that were just born and starting to walk. The rest of that day and into Thanksgiving Day, nine of the ten calves were born. The only issue was Rosie and her calf – the one belonging to Kerri.

You see Rosie got extra feed from Kerri and Big D. This was on top of the prodigious coastal grass. Needless to say, Rosie was having trouble birthing her calves. With one hour to go to before Thanksgiving dinner, the issue had reached a crisis.

Rosie was mooing loudly and was running around with her half born calf. Jim Bachman in the farm over had come by to wish us well. He immediately assessed the issue and told my brother and me that we had to get Rosie to the vet. Jim went and got his truck and trailer. He also brought our other neighbor, John, another admirer of my Dad, and we started to try and corral Rosie into her pen so we could load her into the trailer.

So for the next hour and a half while the turkey was getting cold, we went up and down The Land trying to get Rosie into her pen. After many fits and starts (a cow in birth distress is really fast and scared), we finally got Rosie behind the plywood gate that passed as our pen.

The next step was filled with hilarity and near tragedy. My brother Gary before anyone could stop him got this great idea that he could rope Rosie. Doing his best rendition of John Wayne, he made a makeshift lasso and threw it at her. It did not land correctly but did serve to spook Rosie yet again. I was just outside the pen when a 700 lbs. cow broke through the plywood gate and straight at me! Let’s say that I moved faster than I had ever done before or since jumping away and landing face down in the mud. Rosie just barely missed me.

Although that last action nearly killed me, it also served to finally tire Rosie out. At 7:00 PM, we finally got Rosie in the trailer. John went back to what was left of his Thanksgiving Dinner after I and my brother thanked him profusely. Then off Jim and I went to see the vet who was on call 3o miles away.

On the way to the vet, I was secretly saying a prayer that the calf would be all right. Over and over again, I thought “Please let the calf be alright” while I and Jim told stories about Big D and how he would have dealt with Rosie and the calf. I knew he was up there somewhere smiling. We finally got to the vet about 7:40.

Now what comes next is amazing. I had never seen a calf being born and it is awesome site. The vet wrapped a rope around the half born calf and pulled. After a few moments that seemed like an eternity the calf was born – Rosie, Jr. After lying on the ground for a few moments, the calf made its first few steps and was alive. Rosie although in rough shape at the time fully recovered.

Now, whenever I feel let down or frustrated, I think back to the story of the Thanksgiving calves. And that is a Game Changer. Being thankful can change your attitude. It can lift you out of the despair of failure and lift you toward the hope of tomorrow. Here are some thoughts on the power of giving thanks.

1. Like Jim and John who helped to catch Rosie, thank your family and friends that help you on a daily basis. No person is Island and our loved ones help us to accomplish the mission that God has given us!

2. Be thankful for your vocation. Your vocation gives you exciting, interesting work that quite frankly puts Thanksgiving dinner on the table (of course sometimes it prevents you from eating it).

3. Be thankful for the inheritance that was given to you from those that have led the way. Like the Thanksgiving calves that were the inheritance given to my kids from Big D, we all need to remember the people that helped you along the way.

4 thoughts on “Life’s Game Changers – The Power of Thanksgiving”