I have written a lot about my weight loss journey.  But I have yet to tell the story of how I gained the weight in the first place.  Also, I have posted plenty of Before and After pictures once I got back to my fighting weight.  But I have yet to post the “Before the Before” picture.

You see from this picture I was fit first! I was a West Point cadet and then a well-toned Army officer.  It has been said that you learn more from what you do wrong then what you do right.  So, this is the story of how I went from a Fit Captain in the US Army that could pick up a ruck and jog 13 miles on any given day to a 358 lbs. behemoth that could barely walk 13 yards without getting winded. 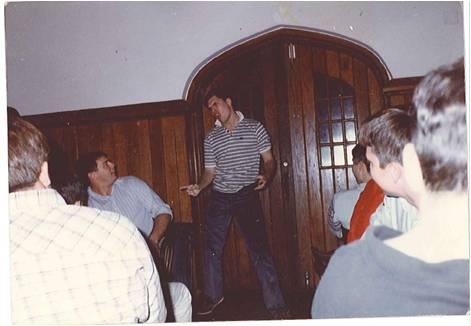 My weight gain story starts as a slow progression to a rapid decline into morbid obesity.  It is not a fun story and I would rather tell the other blog (that will be the next).  But it is a story that needs to be told nonetheless for others who may be dealing with this problem now.

Growing up until my teen years, I did have some struggles with my weight.  I and the rest of my siblings have a predilection to being bigger.  But by the time, I was 15 I shot up like a weed.  I was no longer chunky and my high school sports of football, wrestling, and track/baseball kept my weight under control.

I also could keep my weight under control in the Army and West Point.  I did, on occasion, have to pick up a ruck on the day of weigh ins at the Army to jog a few miles to keep my weight down (I did have a big build).  But it was no problem.  When I left the Army at 175 lbs., I could run a half marathon at the drop of a hat and had no problem with any physical activity.

Over the next 25 years, my weight however more than doubled!  It did not happen all initially.  For the first 20 years, I fluctuated from being 220 to 260 and could push my weight back down easily. The first slow weight gain over the 20 years were the result of three things:

Still until about 2010 and 2011, I was still in a redeemable place.  Then two singular events caused my weight to progress in a non-linear fashion as you see in the graph.  From 2011 – 2014, I put on over 100 lbs.  Not a pretty site.   There were seven habits that drove this prodigious weight gain.  But before we discuss the habits, let me discuss the two triggers that started this “hockey stick” moment in weight gain.

These two triggers caused seven bad habits that I have since conquered in part.  Some I still struggle with but am in a better place.

So now it is time to unveil, the “After” picture. This is a picture of me at a conference after attempting to dance.  I got it from one of my colleagues, as a reminder after I made the turn around.   A few weeks after this picture was taken, I tripped while leaving work and landed knocked out on the ground at 3 AM in the morning.  After an unspecified time knocked out, I was able to crawl back to an upright position just barely getting into my car.  I keep my smashed glasses to this day in memory of this painful memory.

So, there you have it.  How a once fit Army officer, doubled his weight and ended sprawled on the ground literally clinging to life.  I have told this story so that you can learn from my bad habits and stop them if you have them, before they become out of control. The next blog will be titled Fat to Fit Again and discuss how I learned to tackle the 7 bad habits.  As Paul Harvey use to say that “Is the Rest of the Story”.

5 thoughts on “Fit to Fat: Lessons Learned While Doubling My Weight”